Coffee Shop Screenwriter is a story-telling role-playing game for one or more players. Each player takes the role of the screenwriter as they’re frantically trying to write an original screenplay whilst sitting in a coffee shop.

By the end of the game you will have come up with an idea for a screenplay, whilst also developing the character of your screenwriter and discovering more about the coffee shop you’re writing from.

Coffee Shop Screenwriter is a great group game but can also be played solo. An average game will last between one and two hours.

The Screenplay Beats your character is following are also used by professional Hollywood screenwriters, so if you are feeling really adventurous you could use this game to actually write a feature-length screenplay. 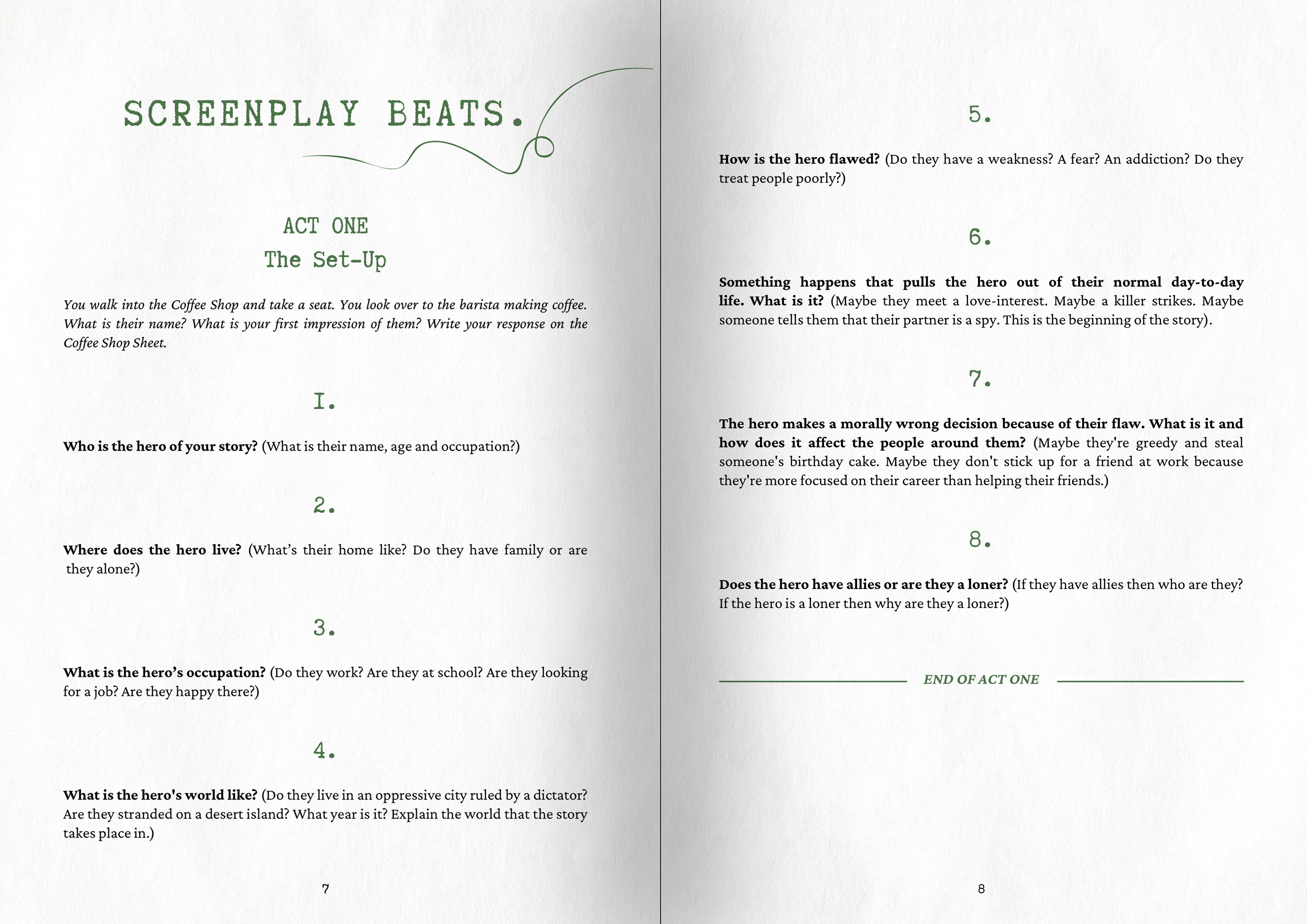 You are an unsuccessful screenwriter who needs to send your latest screenplay to your agent by the end of the day. Unfortunately you haven’t written it yet and you didn’t sleep last night so, in a desperate final attempt, you go to your favourite coffee shop to write, in the hope that caffeine will make you more creative. 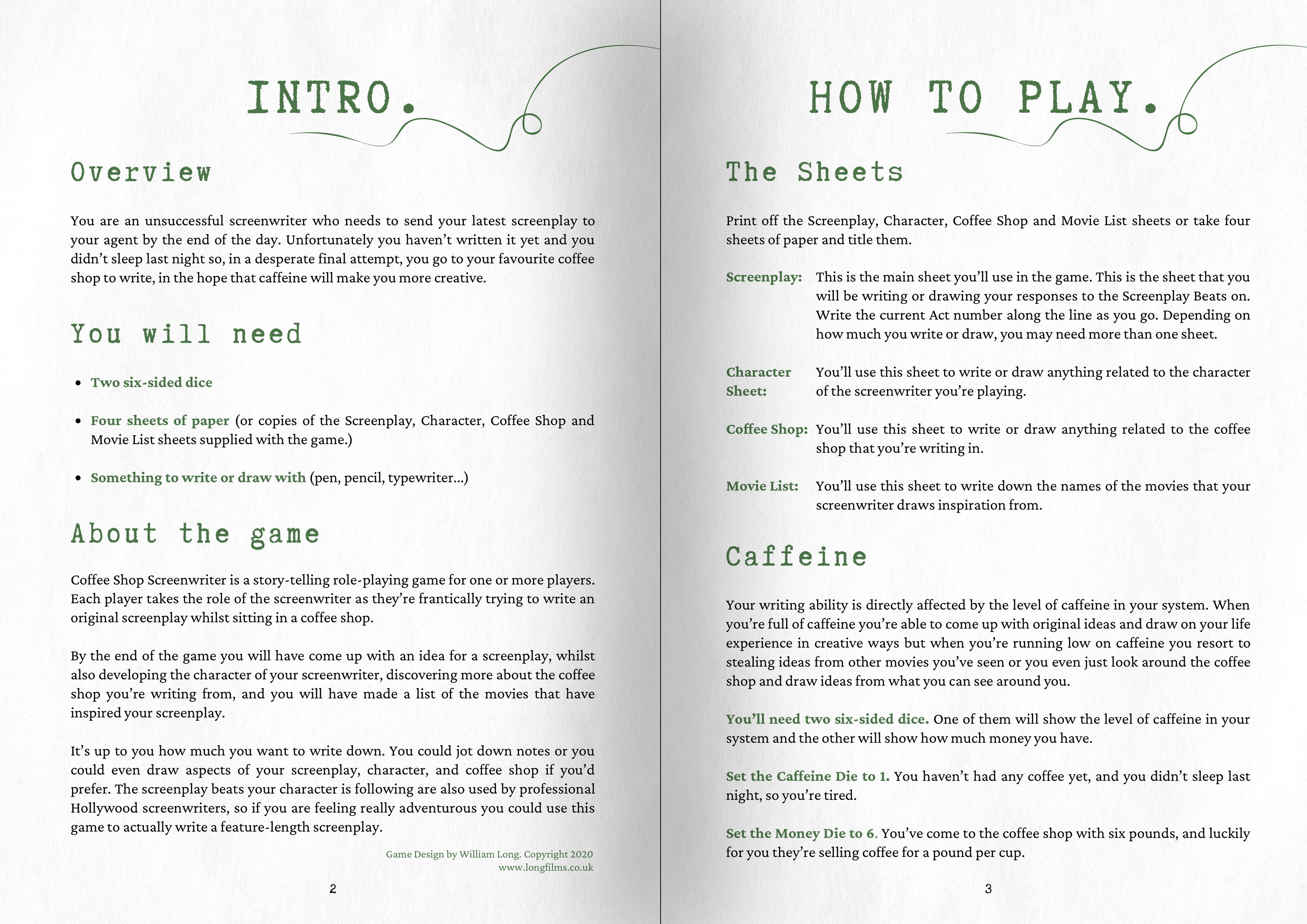 Your writing ability is directly affected by the level of caffeine in your system. When you’re full of caffeine you’re able to come up with original ideas and draw on your life experience in creative ways but when you’re running low on caffeine you resort to stealing ideas from other movies you’ve seen or you even just look around the coffee shop and draw ideas from what you can see around you.

The number on the caffeine die affects where you can draw inspiration from:

You’re on top of your game and can literally come up with anything you put your mind to. Draw a little lightning bolt next to your original idea on the Screenplay sheet to remind you of the time that you were struck by a bolt of true inspiration. You’re a genius!

You use an element of your real life as a source of inspiration. It can be something from your current life, a past experience (maybe something that happened last night), or a hope for the future. Add the real life experience to your Character Sheet. You’re a sensitive poet.

You’re tired as can be and can only muster up enough energy to look around you. What or who do you see in the coffee shop? Maybe it’s a couple having a conversation. Maybe it’s art on the wall. Maybe it’s a dog quietly peeing in the corner. Maybe it’s something you see happening outside the window. Use what you see as your inspiration and then write or draw it on the Coffee Shop Sheet. If you’re using something that’s already there as inspiration then draw a heart next to it to show that it’s been used more than once. You’re too tired and need more coffee.

To make your gameplay more immersive you can also add to your order an hour of coffee shop ambience to listen to whilst playing.

Alternatively, you could play the game in an actual coffee shop.

“Many moments made me laugh aloud… If you’ve ever wanted to write a script, this is your shot at the big time.”

Additional Materials: You will need two six-sided dice and a pen or pencil

In order to download this game you must purchase it at or above the minimum price of $10 USD. You will get access to the following files:

For those who are experiencing poverty or marginalised access to the games community, select this to claim a free Community Copy of Coffee Shop Screenwriter that was purchased by another customer.

For $15 you'll get a copy of Coffee Shop Screenwriter (and the ambient track) and donate a copy of the game for those who are experiencing poverty or marginalised access to the games community to claim. Thank you! 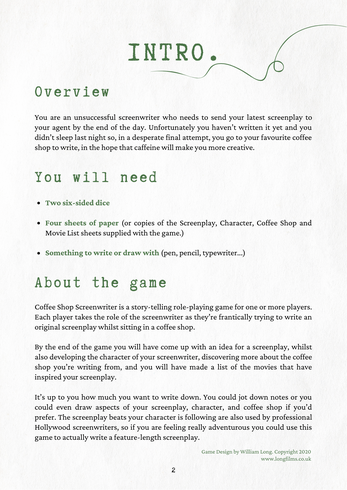 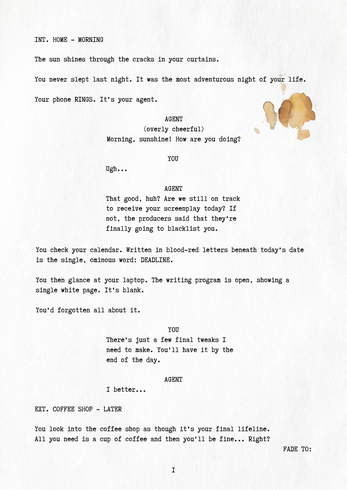 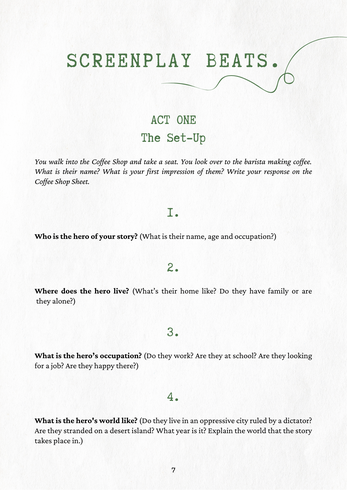 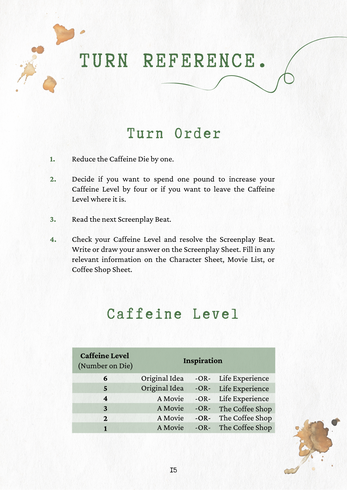